Laptop VS iPad Pro: Can An iPad Pro Replace a Laptop?

The digital revolution and innovation across digital devices have been quite exclusive in the last two decades. The consistent development of products and the effective creation of devices like iPad and MacBooks have presented diversity to people in their professional fields. The proficient development of iPad Pros has brought up the idea of replacing them with a laptop.

This article comes up with the discussion to bring the answer to “Can iPad Pro replace laptop?” For this, we shall look into different scenarios and points that would clarify why iPad Pro can replace a laptop up to some extent.

Part 1: How is an iPad Pro Similar to a Laptop?

It is said that the iPad Pro can replace a MacBook if compared aesthetically. There are several points of similarity that can be discovered across these devices if reviewed in detail. This part discusses the similarities and helps users point them out while considering one of these devices:

iPad Pro and MacBook provide a similar screen size to their users. With a 13-inch display across a MacBook, iPad Pro covers an almost 12.9-inch screen size in diameter, nearly similar to the MacBook. You will have a similar experience of watching and working over things on an iPad in terms of screen size as compared to a Mac.

The MacBook and iPad Pro use a similar processor, the M1 Chip, for operating the devices for their users. As M1 Chip is known for its perfection for its effective processing, the devices contain a similar performance limit, with a very small difference in the GPU cores. You might find a slight difference in the chipset as per the MacBook you consider using; however, it does not seem to be that deviate in terms of performance.

MacBook comes with its keyboard and trackpad, making it a complete package as a laptop. An iPad does seem like a tablet; however, the ability to attach Magic Keyboard and Apple Pencil allows you to write down complete documents across the iPad and propagate within the applications of your iPad. The experience is quite similar to that of the MacBook, which makes the iPad Pro a great replacement in the case of attached peripherals.

Using a Magic Keyboard across your iPad provides you the options to manage the process of your work with different shortcuts. Setting up keyboard shortcuts allows you to operate in a better way, which can also be found across the MacBook.

The basic applications provided across the iPad Pro and MacBook are quite similar, as they cover the basic needs of students and people of different professions. You can download and install design, presentation, video conferencing, and note taking applications on both devices.

Part 2: Is the iPad/iPad Pro Really a PC Replacement?

While we look into the similarities, certain points differentiate both devices from each other. Although iPad Pro is believed to be a replacement for MacBook to some extent, these points clarify the question of can an iPad replace a laptop or not: 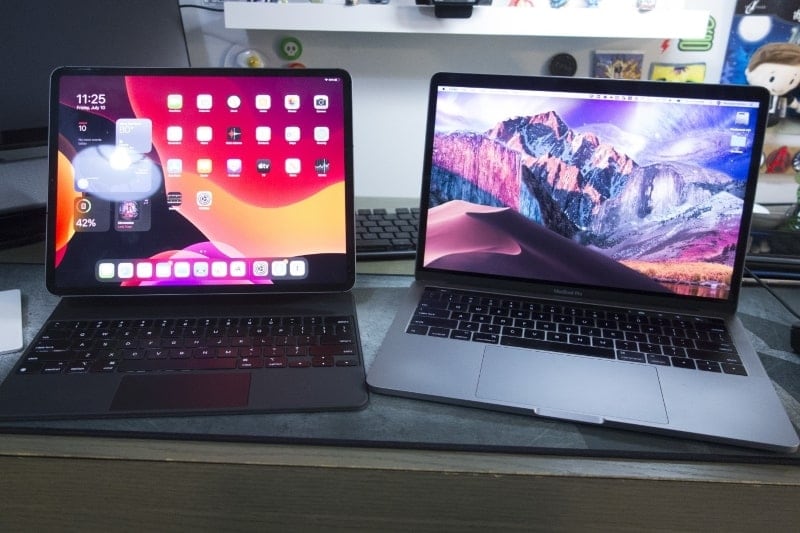 There are different software that are not available across iPad, for you can only download applications from the Apple Store. MacBook, on the other hand, has greater flexibility in downloading software. Along with that, MacBook provides better RAM and graphic card features as compared to an iPad, which allows users to run high-end games across the MacBook instead of an iPad.

There are multiple ports available across the MacBook to allow users to attach different devices with a USB-C connection. iPad Pro does not contain ports, which is a downside when it comes to a replacement for the MacBook.

MacBook is associated with in-build peripherals such as the trackpad and keyboard. iPad provides the opportunity to include Magic Keyboard and Apple Pencil in it; however, these peripherals are to be bought for an extra price, which may get quite expensive for users while seeking it as a replacement.

You can attach your MacBook with other screens to enable dual-screen options across it. This feature cannot be practiced across your iPads, as they are particularly not designed for such purposes. The workability of the MacBook is still more flexible than that of an iPad.

Part 3: Should I Buy The New Apple iPad Pro or Some Laptop?

Apple iPad Pro is a highly proficient tool that can be considered for multiple purposes and scales in the professional world. When it comes to comparing these devices with some other laptops, the decision about Laptop vs. iPad Pro is quite difficult to answer.

To make things easier for you, this part discusses some essential points that should be considered when answering the question of can iPad Pro replace laptop in the professional world: 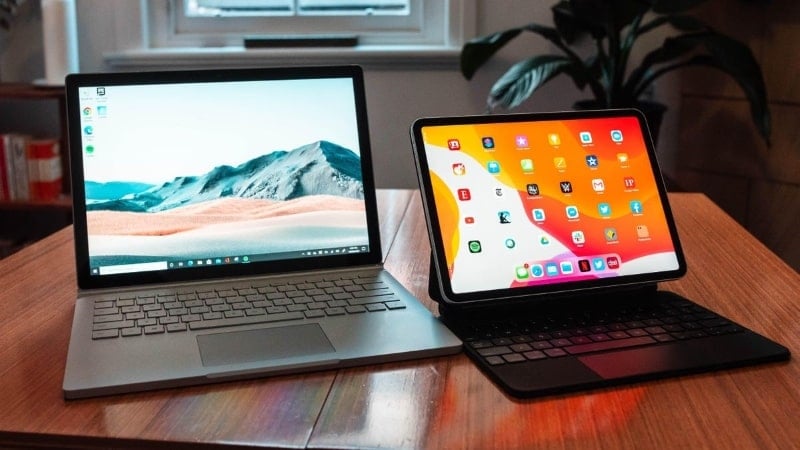 As you seek an answer to “is iPad Pro like a laptop,” it is important to put up to the value that is covered for both devices. Although iPad Pro may seem to be an expensive buy, any laptop that you’ve bought does not come for a lesser price tag. Every software that you use across a laptop needs to be bought, which takes the price beyond your comprehension. Meanwhile, iPad Pro provides you with all basic software without charging any cost. It turns out to be a great option in terms of value for money.

This is without a doubt that iPads are more portable than a laptop. With similar performance, the only difference that may allure you into getting an iPad is the portability that allows you to take it anywhere across the world without feeling a problem. That is why they are preferred in terms of the laptops you buy for your professional work.

iPads are designed for user proficiency. The question of reliability is quite prominent in cases where you have considered using a laptop, as its performance degrades over time. Along with that, iPads do not call for such degradation, which makes them a better option in terms of reliability.

The performance of the Apple M1 Chip is compared with the i5 and i7 processors of the laptops. With it working more efficiently than these processors, the iPad makes itself a great alternative to the laptop for providing better performance to users in their working functionality.

iPads are believed to be more secure than most laptops in the world. Since the iPadOS is designed to keep the user protected from virus attacks, it makes it a safer option than a laptop that may get sensitive to any virus attack quite easily.

Part 4: Can the iPad Pro Replace a Laptop in High School or College?

An iPad seems a suitable replacement for a laptop in high school or college. A college student's life revolves around going through different notes and assignments every day. With the world digitizing every day, the accessibility and exposure to digital content are increasing for students, requiring an appropriate device. However, why would someone consider using an iPad Pro instead of a laptop? 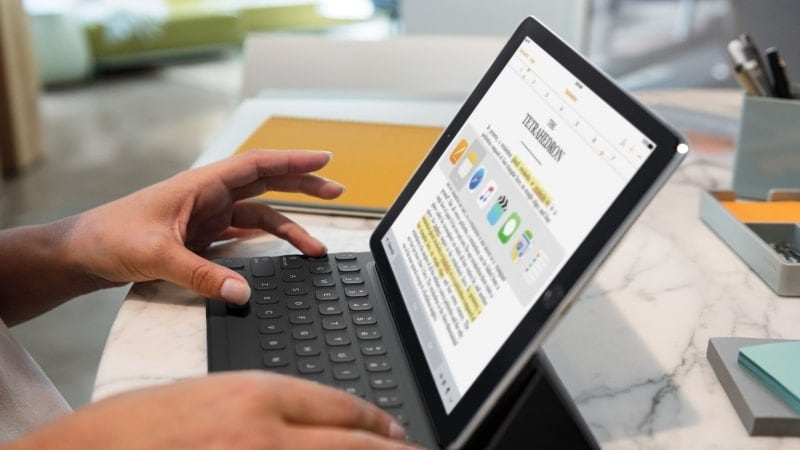 With better performance in terms of battery life and processor speed than most mainstream laptops, iPad Pro can be a perfect package if combined with Magic Keyboard, Mouse, and Apple Pencil. The instantaneous procedure of going across the notes with the help of an Apple Pencil seems more probable than working across a laptop. Being portable, it also seems a better alternative to a laptop for carrying it all through the school.

iPad Pro has been making an extensive user preferability in the market with its extensive features and ability to bind itself according to the working operation of the user. iPad Pro 2022 is expected to release by the end of the year 2022, in the Fall season. With it being the largest update in iPad Pro, there is a lot expected from this release. 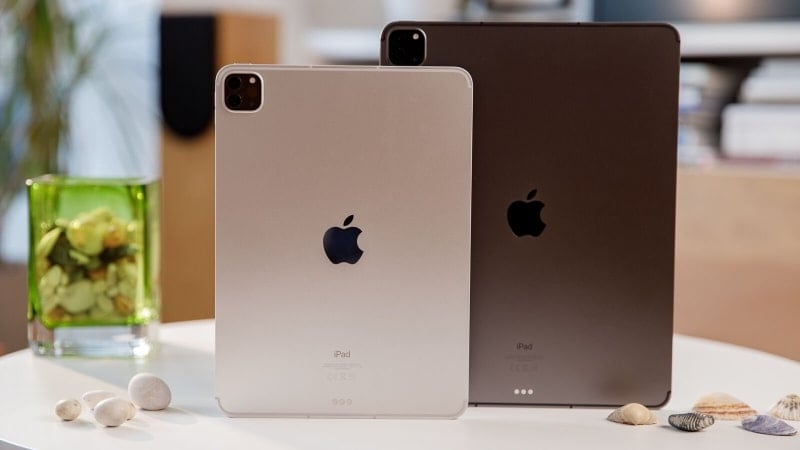 Talking about the rumored upgrades, iPad Pro 2022 will have the latest Apple M2 chip in it, which would be a significant upgrade to the device's processor. Along with that, certain design changes are expected for the latest release, accompanied by better specs in the display, camera, etc. The world expects good from this update, which would surely change the dynamics of the questions about the iPad as a laptop replacement.

This article has provided a diverse understanding of how iPad Pro can replace your laptops to some extent. While answering the question of “can iPad Pro replace laptop" throughout the article, this may have helped you conclude about selecting the appropriate device for your work.