Mirror iPhone screen to a PC

In this article, we will understand 2 simple yet beneficial ways of how can a user stream a VLC video they wish to view from Mac to Apple TV with AirPlay.

AirPlay is such a phenomenon through which the user is able to use the screen of any iOS Device to view or stream a video with the Apple TV. It is very helpful for the user when they have to share their digital content with the people around them. It provides a bigger screen viewing experience for everyone present.

How can a user stream an mp3 or an mp4 video format from Mac to Apple TV using AirPlay?

- First, the user should open the video they wish to stream over AirPlay.

- It should be done using VLC Media Player present on the Mac.

- When VLC Media Player has been opened, then the user should move to the top right hand side of the Mac desktop.

- On doing this, a dropdown list with all the available devices connected to the Mac Desktop opens up.

- Next select Apple TV. This is the means through which the selected video will be streamed on the bigger screen. 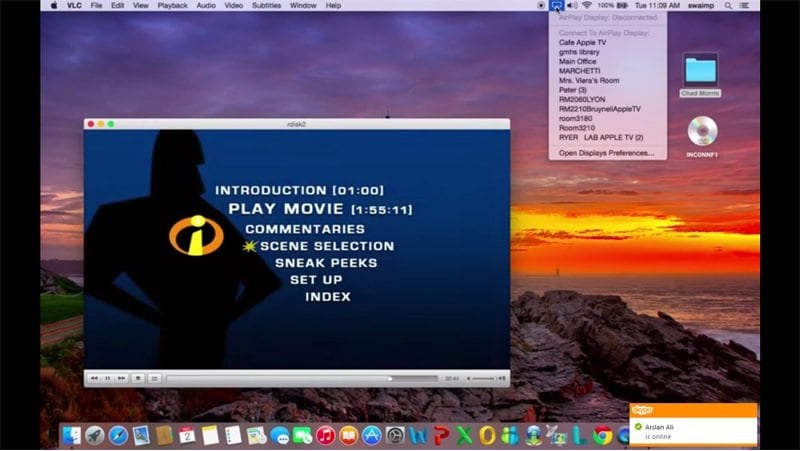 - Next the user should go to audio setting present on the top left hand side of the screen of the VLC Player window.

- By clicking or highlighting on the audio option a dropdown menu will appear.

- At the ending of the dropdown menu the “Audio Device” option will appear.

- Then by clicking on the Audio Device option an additional list of options will open.

- When the option of AirPlay is seen, ensure that a tick mark is present, i.e. it should be selected. This will ensure that the video is rendered through the Apple TV which the user will use later on. 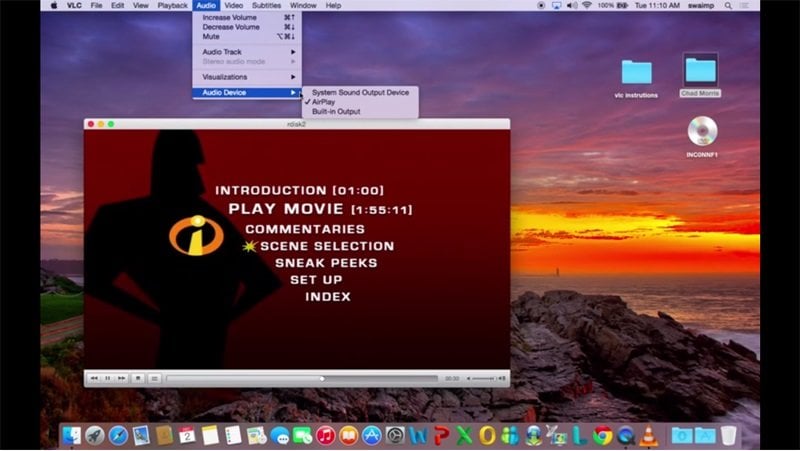 - Highlight or click on the Video option with which a drop down menu will appear.

- After doing that, the user will find themselves present with a list of different options for playing the video of their choice.

- So the user should select the appropriate and setting through which they would like to play the video.

- The best recommended choice for a greater viewing experience for everyone present around will be ‘Full Screen.’ 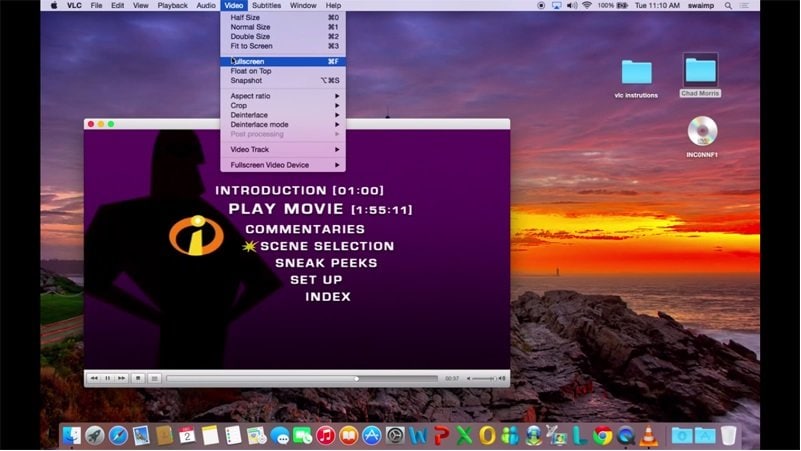 Once after any video has been converted into a compatible version for the Apple TV, then it uses the VLC AirPlay Mirror Apple TV for displaying these videos from the Mac. Some of the different ways of converting an MKV Video have been mentioned below;

How can the user stream VLC videos of MKV Format from the Mac to their Apple TV using AirPlay?

An Apple TV or a Mac will not stream a video of an MKV or AVi format or any other which isn’t compatible for the system. So if such a problem arises then the user would require two such tools would be used.

Subler is software which the user can use to access and convert the format of their .mkv file to a compatible version for streaming on the AirPlay Apple TV.

The user will use it for streaming the converted VLC Video to the Apple TV but only after conversion.

Let us look at both of it in detail now and see the step by step method for the conversion of the video.

Software called ‘Subler’ is used to convert a VLC Video file into a compatible version to be accessible for the Mac and streaming on the Apple TV through AirPlay.

It is completely legal software to be used for a Mac User. While conversion it shows the video file, its audio and its subtitles all separately.

A step by step conversion way for such a file has been mentioned below.

- First the user needs to download and install the software Subler for their Mac. The file conversion won’t take place without this software.

- Once it has been downloaded, the user should click on the installed file and hit “Command & N” keys together. This opens up Subler.

- It can be seen at bottom of the screenshot shown. 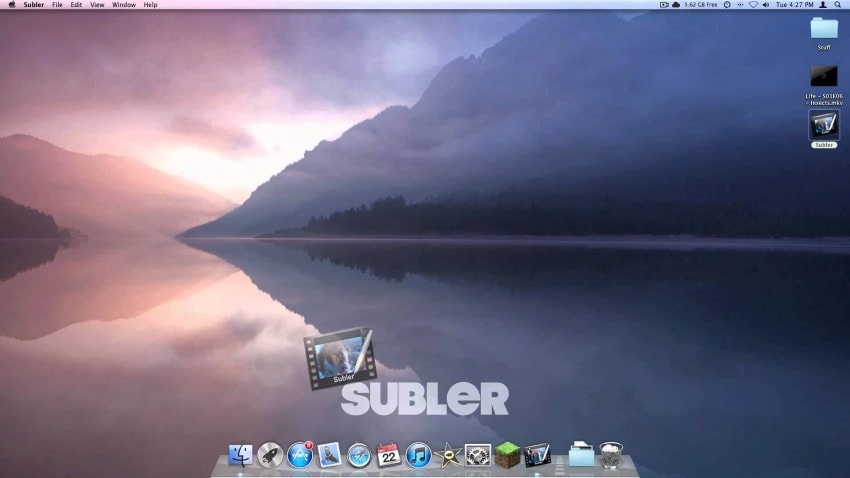 - Once Subler has been opened, the user has to create a new project and add their VLC files. This can be done either by clicking the plus “+” button on the top left hand side corner of the Mac or either by dragging and dropping the file into the opened Subler Window.

- Or the file can be dragged and dropped into the newly opened Subler window. 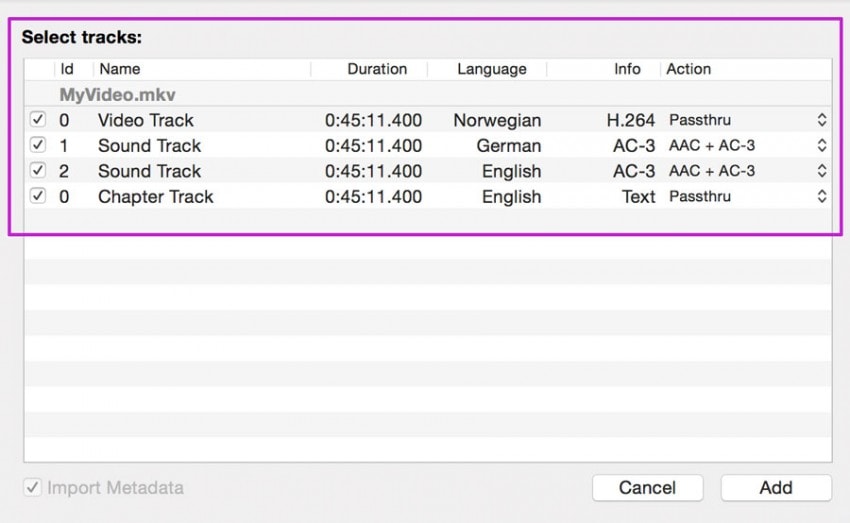 - After this is done, the user will be presented with the window containing the description of the file. Remember;

Do not uncheck the video and audio files. They have to be kept checked before the conversion.

- After this, then the user should click on the “Add” button. 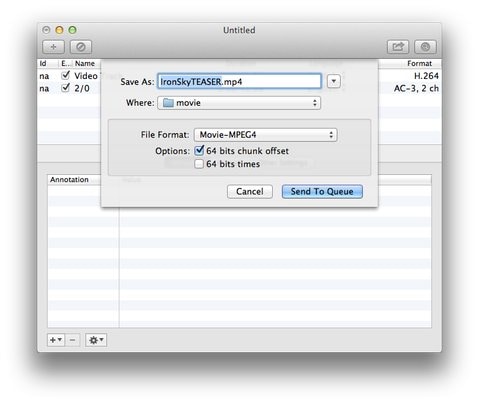 - The user should look at the top left hand corner of the screen. The “File” option will be visible. So they should click it.

- When the dropdown menu appears, then click on “Save” option. On doing this the “Save” Menu will open of the Mac.

- The user should then select the appropriate file format and the place where they want to save it.

- Then click “Save” option on the opened window. The file has been saved.

This file is now ready to be streamed on the Apple TV. And for this, once again the user has to use VLC AirPlay Mirroring.

Ensure that the file has been converted into a compatible version to be streamed to the Apple TV. Then the user should open AirPlay Mirroring and check the following things. 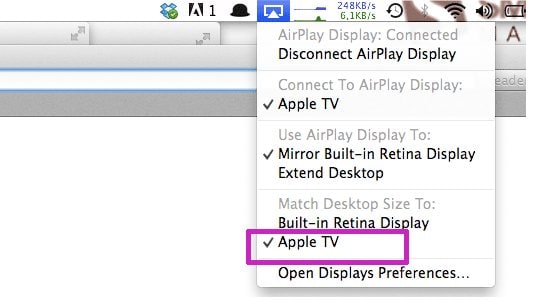 - Ensure that when AirPlay is opened, the “AirPlay Display” option should be shown as connected. It can be seen on the top of the window.

- Also ensure that the option of AirPlay Apple TV has been connected as a tick mark. It can be seen towards the end of the dropdown menu.

The user will need to follow the same steps as above for streaming this converted video as mentioned above in the first way. This is the only way a VLC file can be streamed from the Mac to AirPlay Apple TV. But in this case conversion of the file into a compatible version has happened.

Why is AirPlay Mirror used?

- Know that Apple TV does not support files having the .mkv extension and hence the AirPlay Mirror will act as a medium to convert such VLC videos so that they compatible with the Apple TV.

Why should all the steps be followed one after another in order? If not what can happen?

- While streaming the VLC videos through VLC AirPlay from Mac to Apple TV, ensure that all the steps are followed consistently one after the other. If not it can result in the person not having proper audio or video for the streaming video. Audio will be played only through the Mac Desktop and not through the Apple TV.

What is the benefit of streaming to the Apple TV?

- When VLC videos are streamed from the Mac to the Apple TV, the Apple TV can support almost all types of video files and formats.

Hence, these were the few simple and useful steps in which we can Stream VLC Videos from Mac to Apple TV With AirPlay. Hope these 2 ways will be useful to you as well.