Stream Android Screen to a Computer

How To Stream Anything From Android to Apple TV

AirPlay has been working like magic for users who wish to stream their common media files through numerous devices running the iOS. However, what if one wishes to run AirPlay on their Android Device? While the amateur answer might be something different, we here are going to help you streaming anything from Android to your Apple TV. This shall be done with the assistance of a few 3rd-party software applications. Streaming your media files and other content to the Apple TV from your Android Device is not as tricky as it sounds. Also, users do have the option to choose from numerous applications, and not just one. In the following section, we have discussed few of these applications.

How to Stream from aAny Android to Apple TV?

Here are the apps you can use.

1) Double Twist: For the past few months, this application has become a favorite amongst android users who are looking to stream content through AirPlay. Also termed as a 'triple threat', this free media manager serves multiple functions. Starting with acting as a unified music player, it also comes useful as podcast manager. The real surprise comes in its ability to sync one's iTunes media collection. This includes playlists, music, video, and other image files, and this can be done synced within the desktop computer (both MAC and Windows) and the Android Device you have been working on. Apart from this, users would have to shell out $5 if they are looking to unlock the AirSync and AirPlay functions. That's not all, as the purchase also unlocks the DLNA support. This one is an equalizer, album art search function, and allows the users to remove podcast ads. The beauty of Double Twist lies in the fact that it can stream to any device that is compatible with the AirPlay standard and is connected to the same WiFi network. 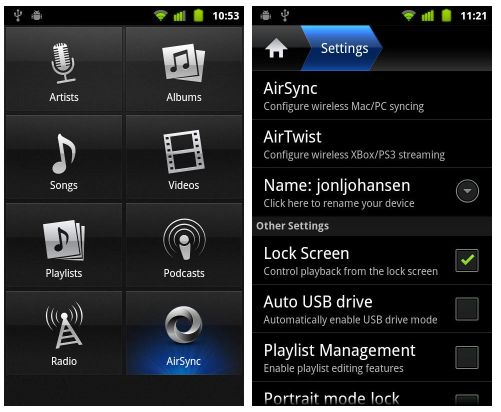 2) Allcast: The number two application on this list is 'Allcast' which allows the content from your mobile device to be streamed across set top boxes and dongles. The application is easily compatible with Apple TV and other devices enabled with AirPlay. One can communicate with Chromecast as this application offers support for DLNA along with communication for Amazon Fire TV, Xbox 360, and One, along with numerous other devices. So, one can make out that is one packs a solid punch. Not only this, as Allcast can also stream content from Google Drive and Dropbox account, along with any other storage device. However, if one is really eager to enjoy all the features offered by this application, like Double Twist, they have to loosen up $5. As reviewers, we thought it was totally worth it. 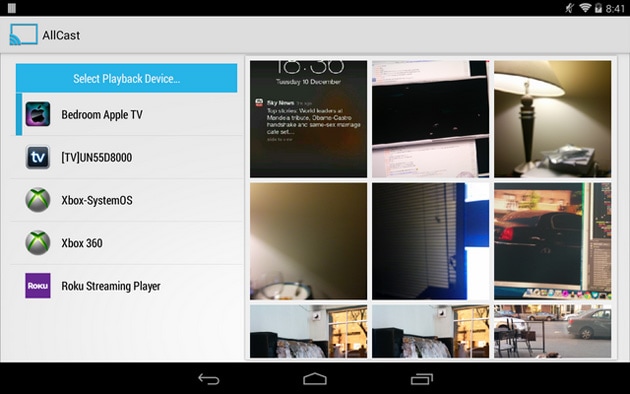 3) Allstream: For the ones who are only interested in music and are too lazy to switch to a new music player, this application has all the answers. Offering the functionality of both AirPlay and DLNA connectivity to its users, the temporarily free application acts as a transmitter. This allows the user to choose their music player which may include services like Spotify, Google Play Music, or any other while giving the streaming ability to existing AirPort express, Apple TV, Samsung Smart TV, and PS3. However, there is another catch users must be aware about. The application requires the Android device to be rooted. Also, a payment of 5 Euro is necessary if one wishes for the application to continue working after a specific amount of time. And if you like the music in Spotify, you can also download music from Spotify and enjoy it everywhere as you want. 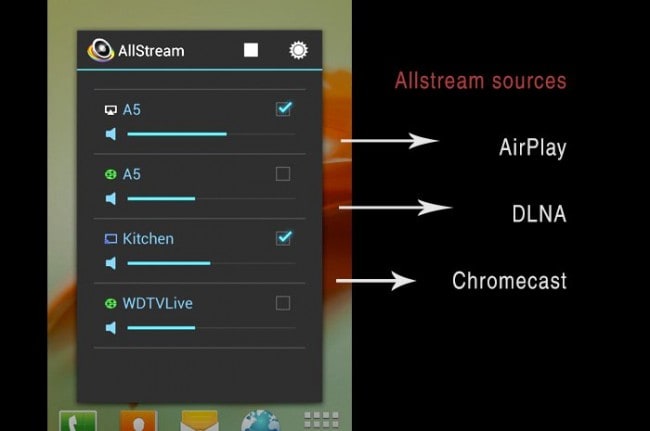 4) Apple TV AirPlay Media Player: For the ones who have been following this list for a while, the name should be a getaway. However, the application is specifically designed to be used with Apple TV. The beauty of this app lies in its functionality which allows it to stream content based on the Android operating system and also any content that is stored on the local network to your Apple TV. It also converts your Android Device into all-in-one remote control. This enables the users to browse, search, and share content from a variety of online sources which include video podcasts, YouTube, Facebook and other media based social media networking websites. However, it is important for the users to note that they must be running Android 2.1 or later and also should have a working ZappoTV account setup if they are looking to use this app. Alongside, DLNA and UPnP connectivity is available through an internal purchase. 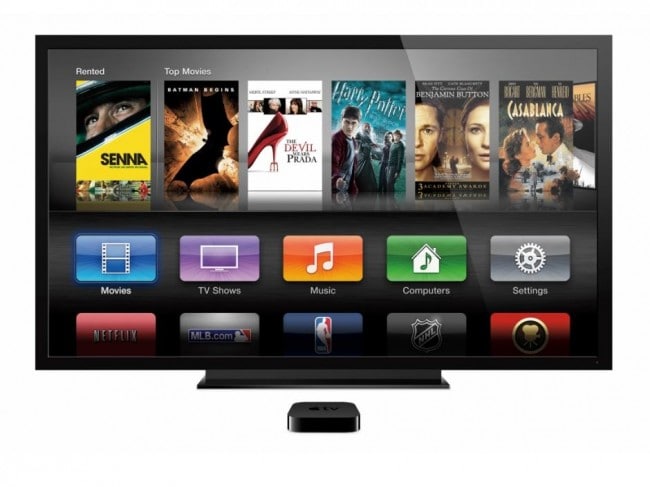 5) Twonky Beam: Here is the application that is ideal for streaming video apps. Available for both, iOS and Android platforms, it comes with dual AirPlay-DLNA capabilities, and has the functionality which makes it compatible with numerous varieties of TVs and streaming boxes, without having the users to worry about the transmission standards. Xbox 360, Apple TV, is among the few of these. Sharing content between devices on the home network in the presence of an UPnP standard that is instrumental in helping users save media from their local network to the mobile device as the content is streamed on the Apple TV. However, a version later or equal to Android 4.0 or iOS 6.0 is necessary if one is looking to use this free application. 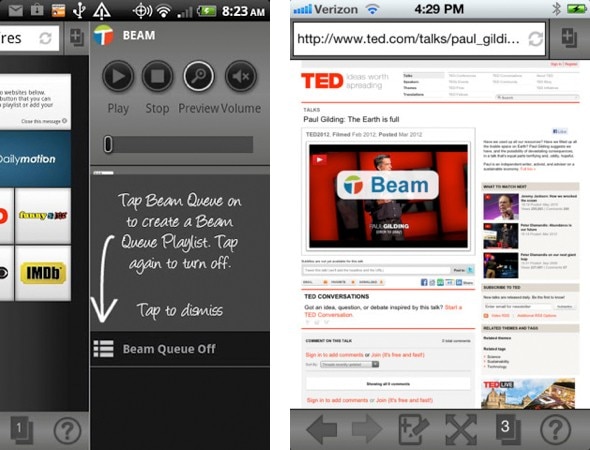 Thus, we have compiled a list of a few applications that can come in handy if you are looking to enjoy the functionality of your content on the Apple TV. Android users earlier used to complain about not having anything on the Apple TV for their device, but with these apps and many others that can one discover on the Google play store, things have got better. Let us know in the comment section, how was your experience of streaming content from your Android Device to your Apple TV.