The Best 10 WhatsApp Emoticon Apps for iPhone and Android

WhatsApp is a great messaging application that has taken the world by storm. A major portion of smartphone users are currently using this application. It allows the user to send and receive messages from his/her friends and contacts. One of the best features of WhatsApp is the emoticons.

Emoticons, which are also known as smileys, have made our conversation on messaging application more interesting and effective. One little smiley is equivalent to a bunch of words, and it does a better job letting the receiver know exactly what do you mean.

One problem is the emoticons from WhatsApp are very limited. But thanks to the developers from all over the world, we can find a lot of good emotticon apps available on iTunes or Google Play. Here in this article, we are going to introduce you ten of the best WhatsApp emoticons apps to help you find or even create more interesting WhatsApp emoticons on your own.

Currently there is no built in emoticons on Whatsapp for iPhone. But we can use emoticons built in iphone keyboard on Whatsapp. Just go to iPhone Settings > General > Keyboard > Keyboards > Add New Keyboard then select Emoji. To enjoy more emoticons, let's see the top 5 WhatsApp emoticons Apps for iPhone.

EmojiDom is a great free WhatsApp emoticons app which has more than 2000 unique emojis. With this app, you can send emoticons to not only WhatsApp, but also other platforms like Google+, Facebook, WeCHat, LINE etc. There is an outstanding feature of this app  is creating custom WhatsApp emoticons from any image which adds a great uniqueness among the fleet of other apps. you are free from hassle as there is no need to install additional keyboard for using the app. 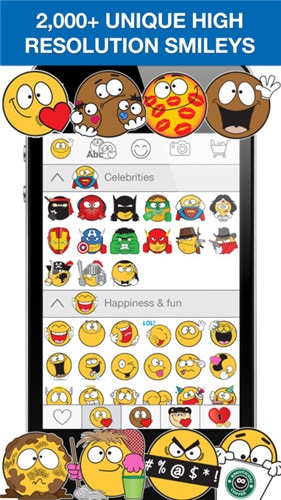 2. “AMAZING!”
This app is great for connecting with other brand devices! My dad doesn't have an iPhone but I can send him emojidoms and he'll get them, unlike emoji!

3. “False description”
They don't have a middle finger emoji as stated in the description.

This awesome EmojiFree app comes with Emoji words, Emojify, Emoji art, Emoji and walk, Custom Emoji style Icons etc. It offers innovative and well-designed cartoon images, and coolest fonts available to bring you incredibly marvelous messages. These all features bring great experience for the users of this app. Social sharing button gives much room to sharethe emojicons anywhere, any platform without annoying you much. In one word, this WhatsApp emojicon app has puzzling adventure in it. 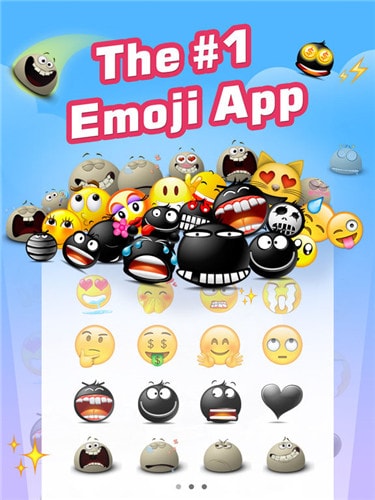 1. Best out the many Emoji called apps
I've downloaded so many of these Emoji apps. This one has really cute & colorful Emoji pics. Soo my style!! My fiancé even commented later in the day after he got my text that he really liked the whale I sent. No pop ups or weird links included either.

2. BAM!It Didn't Work
I'm using an iPhone 6 w/ the latest software update (iOS 13), but this app provided Nothing after getting it.

If you want to add more colors to your digital chat with your friends and families, there is no better option than using Emojiyo. The application is better than others if you want to have customization in your smiley keyboard. Emojiyo allows the user to drag and drop the emoticons so that the users can have more accessibility. You can edit and save in a more customized way with tons of different emoticons that can be sent out to many social media like Whatapp with a click. The app allows users to define the combinations of emoticons saved as per their definitions unlike the previous apps. 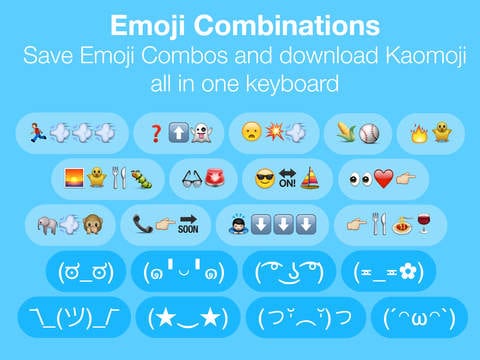 1. Very, very nice
This app works very smoothly, and I have actually turned off regular emojis, and only kept emojiyo. I absolutely love the "packs" and the "combos" it definitely makes things smoother. For sure get!

2. Good but
This app is really good, but there is one problem with it. It hasn't been updated in a while and is missing quite a few new emoji which is disappointing.

Not like the previous apps, Emoji Keypad is not totally free as you will have to spend a little fee for using the app, but that cost is not valueless because it gives you ample room for great stickers and editing features. Not only that you can use combo emoticons with this app. Fancy fonts are out there in the app to dazzle the receivers of your messages using. 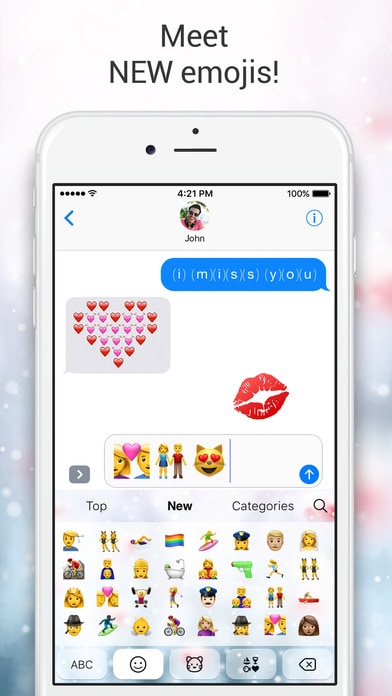 1. Best keyboard out there
Works amazingly, great color selection, easy to add to your regular keyboard. No issues thus far.

2. Update Soon Please
I really love this app. I like the stickers and the different colors of the keyboard, but I find myself going back to the original keyboard because the word predictability is more accurate.

How is it to play games with emojis while you can send those too? Fantastic! Emoji gives you the full freedom of using emoticons in many different ways. This is a great app for allowing you for many emoticons while using your WhatsApp to send messages. You can download the app from the link below and enjoy having great fun with your friends and family. 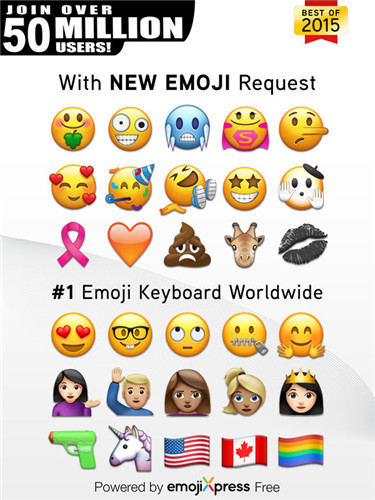 1. This is hands down the best emoji app
Easy to use and install. I'd highly recommend this app over all the others. The extra $0.99 for bonus emojis is not worth it, so I wouldn't bother with that. All the emojis included in the free app are enough.

2. Total Disappointment
After only about a month of use, it has become a disappointment. They have claimed that they have "upgraded" its version. However, after this "upgrade," many emojis were gone.

SwiftKey Kytboard is undoubtedly the application for typing in the entire Android and iOS marketplace. This app comes with lots of WhatsApp emoji. The keyboard is stylish and works perfectly by all standards. The keyboard introduced the swiping keyboard feature and it makes typing so much easier. The app also boasts its own set of themes, paid and unpaid both.
What is better than having a fully fledged keyboard? Answer is a keyboard with a vast selection of emoticons for your disposal. SwiftKey Keyboard contains a wide variety of emoticons, which begin with the very basic ones to the ones which are often newly introduced. In addition, the emoticons which are mostly or recently used are kept in a separate section for easy future use. 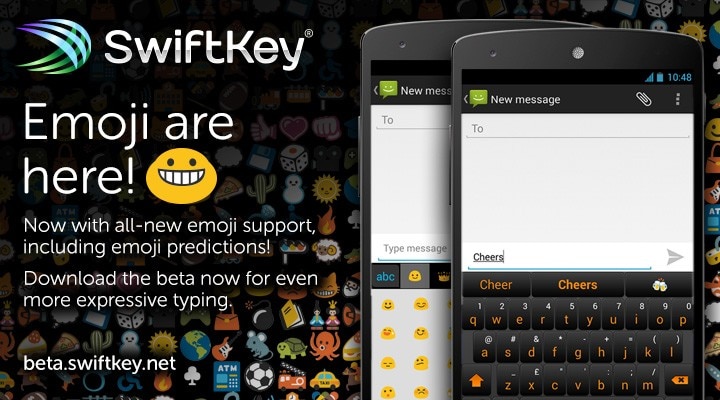 1. So far, this is the best keyboard application i ever used

2. Need to improve word suggestions. It suggests word in plural format first in spite of suggesting singular format at first. 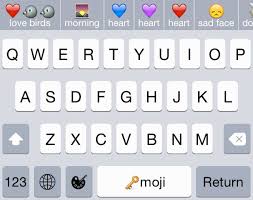 1. Cute, easy to use Even we "middle age, soccer moms" want cool stuff too! Thanks for an app that was really easy to install & use! Even better that its free,.

2. Yes? Still working on getting to see if it works out. So far, so good.

IMoji is not an application for WhatsApp emoticons but it is almost an independent messaging application. That is the drawback of the app. However, the app is unlike any on the list and is perfect if the user wants to send a personal touch as part of the emoticon stickers. This app is for both Android and iOS devices and is perfect in its own use.
The app lets the users create their own emoticon using their face or the faces from other photos. This adds a more intimate touch to the messages being sent and the emoticons being used are called as stickers. The stickers can be continuously made and there is no limit on the emotions being expressed in IMoji. 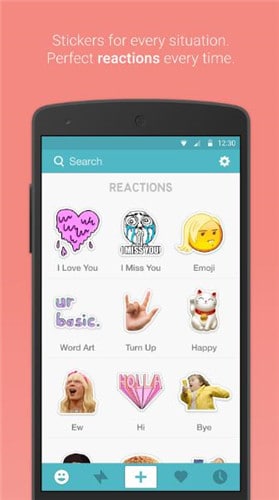 1. I've had this app for a while now (about 6 months) and I don't see any issues. My friends love it when I send them a new one! I definitely recommend this app

The application is similar to KeyMoji. Emoji Type is solely for iOS users and so the iPhone WhatsApp messenger is benefitted. It provides the users with options related to the words being typed and is great in its suggestions. If KeyMoji does not work for you, you can always try this app.
The app also stores the history of the emoticons used, the phrases for which they were used for. This makes using the app more fun and simpler. Lastly, keyboard is self integrating with other applications like Facebook, Twitter etc. 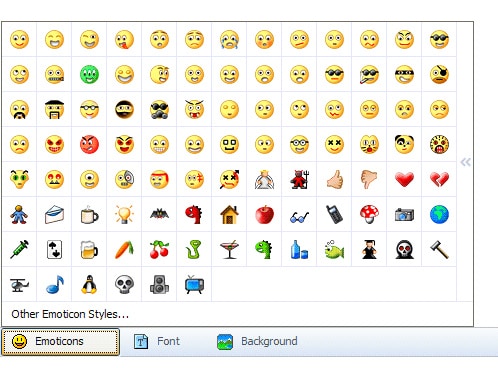 Last but not the least is EmojiArt. The customizable list of emoticons allows the users to make certain modifications to the existing emoticons. This app is organized with more than 3000 beautiful emoticons. The emoticons on the app will be painted or more emotions can be put over them by this app. The emoticons keyboard is blazingly fast and you can swiftly use as many icons as you wish to use and send them to your near and dear ones within a second like a magic. 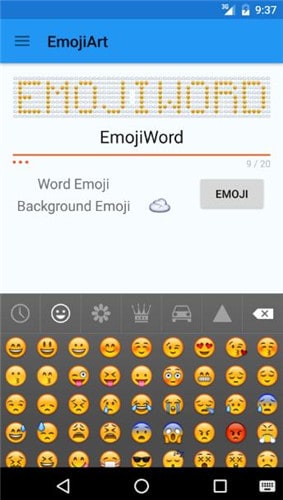 1. So awesome My girlfriend loves the ones I sent Her.


Lastly, the apps are great in its functionality and will make the user unique in the use of such emoticons.

7 Whatsapp Settings to Customize Whatsapp as You Desire