Quick Guide to Use AirPlay on PC (Windows)

Apple has been instrumental in changing the way we use peripheral devices. For the ones who loving working with numerous devices in their homes, switching between multiple media devices can be a problem. While the consistent transfer of media files can tire any user, there is also the issue of compatibility. Therefore, Apple developed a function called 'AirPlay'. Ideally, AirPlay is a medium to use the existing home network to bring together all the Apple devices, or to link them to each other. This helps the user access media files across devices, without having to worry if the file is stored on that device locally or not. Streaming from one device to another helps you save yourself from storing copies on multiple devices and eventually saves space.

However, what about the ones who wish to use the same feature while operating a Windows PC? Luckily, AirPlay does use some extra software programs that are usually sourced from a third party to source this issue. For both commercial and reasons of secrecy, the AirPlay feature doesn't easily go with Microsoft Products, the Windows OS being one of them.

So, how do we go about using Windows to stream the media files from various devices, or from the internet? Here is our quick guide to use AirPlay on PC (Windows).

Part 1: How can AirPlay be used on PC (Windows)?

To get AirPlay working on a Windows PC, one has to use an additional software program. In this article, we'll help our users with the 5KPlayer. It is one of the best free streaming media player for the users to AirPlay Windows PC to the Apple TV. After installation, this program which acts as a media server transfers everything from the Windows PC Screen and everything that is being played through the PC speakers to the Apple TV. Users do not have to depend upon any wirers or adapters, and every pixel is presented as it is without you having to worry about the loss in quality.

This is where the 5KPlayer comes into play. Let us discuss few of its features.

1) There is a built-in Bonjour Protocol that helps streaming of media files to the Apple TV, and that is exactly how Apple turns its other iOS devices into media servers for AirPlay. As a user, you can rely on the 5K player as it remains reliable and secure.

2) If you have a PC running the latest variants of Windows, you can receive music and other media files from your iOS devices. The 5KPlayer enhances your viewing experience by ensuring that the AirPlay Mirroring from PC to Apple TV is enabled.

3) That's not all, as you can also use this media server to the project a currently playing movie from the PC to the Apple TV, and also respond to your IMs as the playback is carried on in the background.

4) You don't have to worry about your work emails too, and also carry out the work of photo polishing on Windows PC without having to miss anything that goes on in the playback. So, here is your ease of functionality.

You might have to seek assistance of a video converter for MAC and PC as there are some old video formats like .mkv, and .avi that are not supported on the AirPlay TV. If you want to receive the media files on your Apple TV, please convert the media files to .mp4, .mov, or .m4v, and .mp3 music.

Part2. How to use 5KPlayer to run AirPlay feature on Windows PC?

Here are the following steps:

This can be done by tapping the AirPlay icon on the top right corner that occurs in Windows PC, and you shall find the Apple TV name in the drop-down list. If you are looking to enable AirPlay from Windows PC to Apple TV, simply tap it. However, make sure that the devices are connected through the same Ethernet connection or over the same Wireless Network. 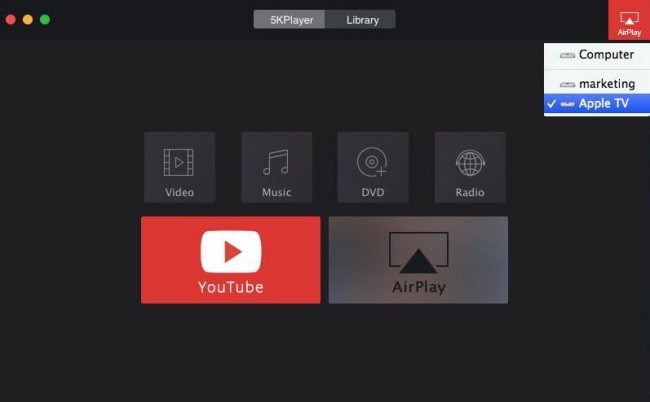 You must import the video/music that you are looking to AirPlay from the Windows PC to the Apple TV. This has to be done by tapping the Video or Music button that lies on the main interface. Also, you can start the streaming to the Apple TV from the PC through the drag-and-drop option to the playback area for your media files.

You can remotely access your Apple TV from the Windows PC after the installation of 5KPlayer is complete. It has now turned your Windows PC into a flexible AirPlay controller for your Apple TV. Features like Volume Adjust, subtitle/soundtrack selection are also available. However, you must ensure that the format of the file selected is compatible with Apple TV. 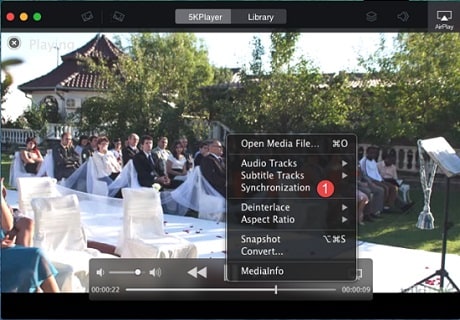 If you are running a Windows PC, or are simply too lazy to buy a MAC, you can use the 5KPlayer to get the job done. While the earlier days saw lack of support for AirPlay on any Windows PC, today, there are a lot of independent programs available in the market for the users to choose from. Let us know your experience with the 5KPlayer in the comment section. To know more about AirPlay, check out our other articles on the website.