This article introduces 3 free screen recorders for iOS 11/10. Get this iOS Screen Recorder to record iOS screen with HD quality.

There are many reason you may want to record iPhone screen. For instance, you are playing a game and want footage for a tutorial or simply rebroadcast it via YouTube as part of your content. As a result, the question often asked is what is the best way to do this. With that in mind, we take look at what is on the market as a screen recorder iOS for iPad. Picking the best 3 free screen recorders available for you today that do not require jailbreaking your device. 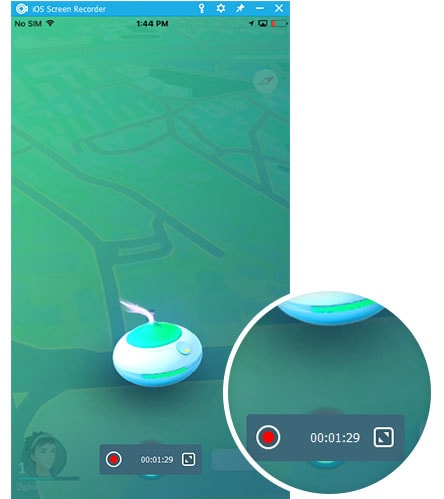 iOS Screen Recorder is a professional utility that enables high quality recording of your iPad screen, and is compatible with iOS 7 to 12.

This screen recorder for iOS works by wirelessly mirroring your iPad screen onto any PC or Mac. Once mirrored it allows you to record that video in one simple step. It is incredibly easy to use, with one click recording and an intuitive setup process that means anyone use this iOS screen recorder with ease.

Easy to install and easy to use, iOS Screen Recorder has several strengths that really stand out. Ease of use, HD recording and the ability to include high quality audio from the iOS device. This makes this screen recorder for iOS easily one of the most user friendly available today. You can follow the steps in this iOS Screen Recorder app installation guide to get the app on your iPhone.

AirShou is available for download here, and is another app that works as a screen recorder for iOS, including the latest version 10.

Again, a simple button press enables screen recording, and you can customize format, resolution and bitrate as needed. In terms of a screen recorder for iOS it is a little basic, and installing it can be a little problematic if you have not used the iEmulators app store before. 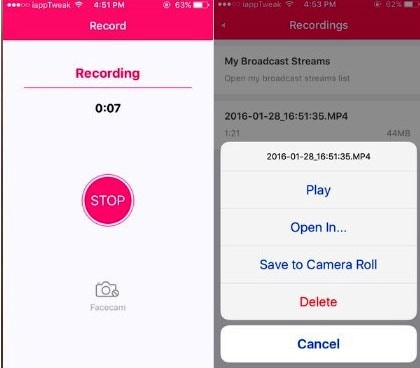 A no frills approach to providing a screen recorder for iOS, AirShou offers a simple interface and easy to use one button recording. It offers a little less customizability than others here, and the need to install via the iEmulators app store can be off putting for some. However, it uses little of your iPad’s resources and is especially suitable for game streaming for this reason. For those who are looking for simple, basic streaming, it performs well.

But now, it is unable to download since their company didn't provide the related service. You can also find an alternative to AirShou.

AirServer is a little different, it is an app for your windows or Mac computer, available for download from their website here. It requires no install on your iPad, but as the video is cast to the computer it still works as an iOS screen recorder from there.

It works with the inbuilt Aircast ability of all modern iOS devices including the iPad, and captures that streaming output on your computer for recording.

Although a slightly different approach, this screen recorder for iOS works well as long as you have a suitable PC or Mac available to record on. It makes use of the inbuilt ability in iOS devices to transmit via Airplay and provides high quality recording of your streamed screen content. Once setup it works well, however it is a little less intuitive than others here, especially Dr. Fone, and there is something of a steep learning curve when getting started.

As we can see, there are several different approaches taken to overcoming the limitations of iOS screen recording. All of them have something to offer, with each providing a solid service when it comes to recording your iPad screen. However, one does stand out as the market leader here, and that is the Dr. Fone iOS Screen Recorder.

There are several reasons for this, but in particular it has strength in its ease of use that really sets it apart from the other offerings here. Being able to press one button and everything is taken care of does make a difference, especially if you are new to screen recording. That alone makes this screen recorder for iOS a better experience in those first few recording sessions.

That is not all, the customization on offer is also impressive, allowing a tailoring of the output to suit every need. From high resolution content for YouTube tutorials to ‘play along’ style videos of gaming, Dr. Fone’s app can be set up perfectly for any situation.

In terms of video output, it was also at the top of the test, with consistent, high quality video every time. Audio is also recorded very well, giving us an overall package that can be relied on to deliver high quality video for whatever application you have in mind.

If you need a screen recorder for iOS, Dr. Fone’s iOS Screen Recorder is without doubt an excellent choice. It provides all the tools and features you will need in an easy to use, intuitive and customizable package. Most importantly, it just works, when you want, how you want.