Android phones have many options that make them popular with the users, and one of the mostly used ones is the android voice recorder. The very name of the feature speaks for itself, as it allows you to record audio with your phone. This comes in handy if you are a reporter making an interview, or you are listening to an important lecture you would want to listen again. It also offers a great deal of fun, as you can use it to tape your friends singing at a karaoke party so you could have a laugh afterward, or even record yourself while making some funny noises and then share it with the public. Voice recording option has been around for a long time, pretty much as long as the cell phones themselves, and has evolved from basic stuff to all the modern applications that allow you to record in different formats, higher or lower quality and even to perform android record screen with voice option, which enables you to make game tutorials or reviews with your comments. There are numerous android voice recorder apps, but we have chosen five for which we believe are the best that market currently has to offer.

We are starting with a simple app which some of you must recognize as it used to be the part of phones Sony made. Audio recorder is free and it delivers everything basic users expect from this kind of app. With just a simple click, you have the option of starting to record your audio. Besides from stopping to record, the android voice recorder software allows you to make a pause in recording and then continue to record to the same file. On the same screen, there is a play button which enables you to hear what you recorded right away, or you can access the database of your previous recordings. Support for a microphone is included, and there is an engine that helps to improve the audio built-in. Overall, it's a great app, and while it is free, you should be aware that by installing you agree to send anonymous data, for the purpose of further improving the app. 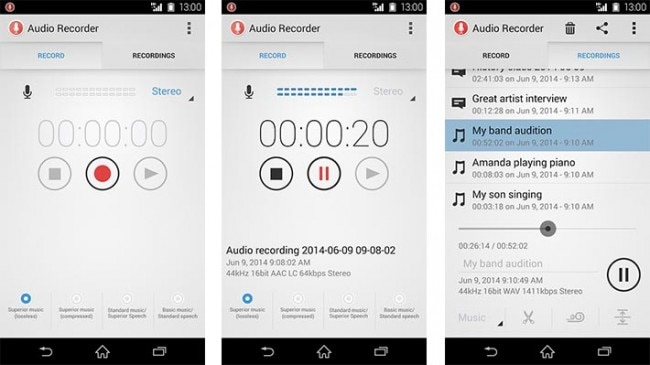 Next we present you Titanium Recorder, another free android voice recorder app. The best quality of this app is that it is completely free while at the same time not having any ads, and no-ads policy developers have decided for will make a lot of users satisfied.  You have the possibility of recording HD audio using 8-bit and 16t-bit configurations, and if you want to save some space, you can choose some of the concise formats available – MP3/ACC/3GP. It has a beautiful and simple interface, along with a great file manager that's really easy to use, with the options of name editing and sharing at the reach of your hand. Another neat feature is the option of recording in the background, so it doesn't stop the normal use of your phone. On the other hand, there are several complaints from the users about the issues related to specific devices, but most of them praise the app in their reviews. 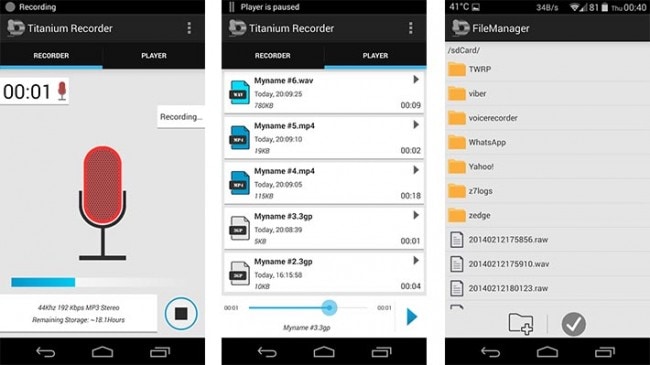 Moving on to the next app, Voice Recorder by Splend Apps, which has been created for more serious users who are experienced in using android voice recorder apps.  Those who are looking for a simple voice recording solution should look somewhere else while the advanced users will be more than satisfied with this app that offers lots of features and options. You can adjust a lot of things, starting from bitrate and sample rate, you have the possibility of recording in three different audio codecs, and you are offered live spectrum analyzer and widget support. The app is free to download, but it has some in-app purchases that can give you even more features. Average users will be more than satisfied with the free version while the experts might consider unlocking themselves a full version, in order to have all the features at their disposal. 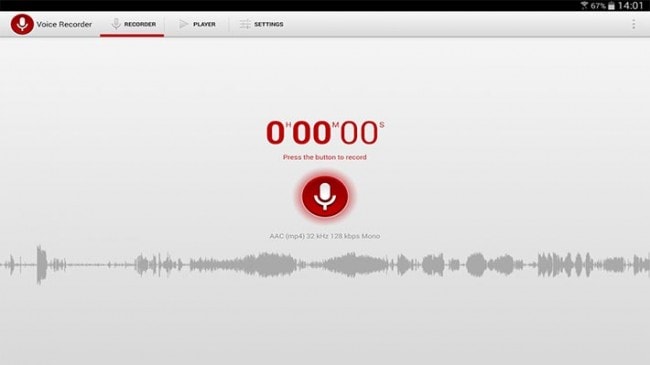 According to the developers, this app was made for longer recordings, and one of its main features is related to that. Considering it was created for recordings that are long, Smart Voice Recorder presents a silence removal on-the-fly option, which means it will automatically detect periods of silence and erase them, so you won't be bothered with them when listening to your audio. So, if you want to use it to record the babysitter you are hiring for the first time, or to tape what you talk during sleep, this is a perfect android voice recorder app for you. The length of recording is determined only by the space available on your device, and it has the option of working in the background with display off.  It is quite easy to use and its interface reminds of simpler times, which might not be met with agreement by those who love the modern material design, but there are people that will encourage this approach. 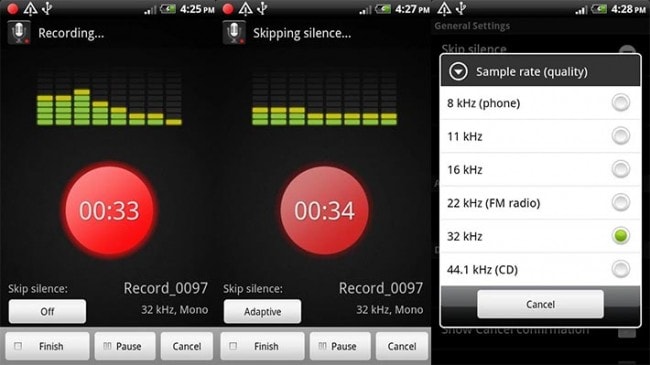 Before moving on to android record screen with voice option, let's take a look at another android voice recorder app for advanced users. RecForge II is intended for those who are into music, as they can record their band rehearsals and use it for music learning. With a headset, you can monitor the recording live, you can also schedule your recordings, and there is also the option of skipping silence. Besides, you can convert and edit your audio files for commentary or ringtones, and the interface, which is extremely user-friendly, makes all this very easy. The entire app is free to use, however, there is a limitation of three minutes for all file formats, except wav format. To remove this limitation, you need to buy RecForge Pro, which is not expensive and can be a good investment, if you think about extensive options this app offers to its users. 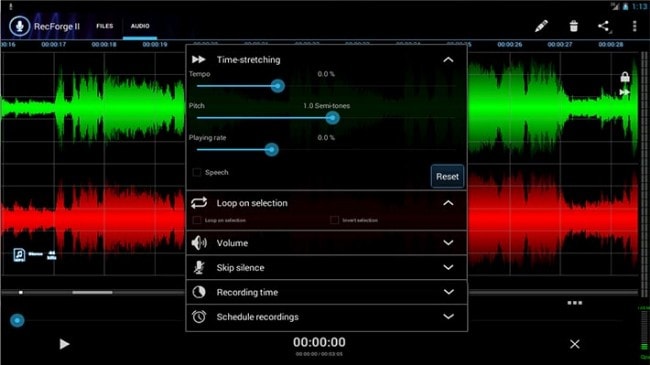 This software allows you to take complete control of your phone with your computer. You just need to connect your android phone with your PC via USB cable (you can also use Wireless afterward), and you will get the opportunity of looking at your phone interface on your computer and controlling it with a mouse and a keyboard. This means you can play mobile games on bigger screen, as well as chat on the social apps much easier.

With android record screen function, you have the ability to make a video of what is happening on your phone, and MirorGo also offers the ability to record your voice along with the video. This means you can easily make a tutorial of that troubling part of the game revealing your game secrets, do a game video review, or go through your gallery images, comment them and create a memory video for your friends. Basically, by using android record screen with voice feature, you can tape a video of your phone screen allowing your voice to be heard over it.