Mirror iPhone screen to a PC

Can I Use Miracast On Mac?

An HDMI cable is a great way for you to connect any device to a TV or an external display. It allows you to project media playing on your small-screen device to a more visually accessible display so that more people can have a look at your content; the biggest downside is that it requires a physical connection---cables can be hazardous to clumsy people. When it comes to wirelessly mirror your device's screen, there are a few options to consider. One of them is Miracast.

Miracast utilises WiFi Direct technology to build a connection between two devices without the need for a router. Therefore, you will be able to connect a mobile device (laptop, smartphone or tablet) to a secondary display receiver (TV, projector or monitor)---with it, your what is on the screen of your mobile device will be mirrored on a TV, projection or monitor screen. Its peer-to-peer connection means that it has a secure connection so that any protected content like Netflix or Blu-ray cannot be streamed out. These days, there are around 3,000 Miracast-supported devices---seems a lot, but there is still much room to be filled.

Part 1: Does Miracast have Mac version?

Like many other pieces of technology, there will be some compatibility issues with Miracast. To date, both of Apple's operating systems, OS X and iOS, do not support Miracast; therefore there is no Miracast for Mac version that exists. This is simply because Apple has its screen mirroring solution, AirPlay.

AirPlay allows users to view and watch media content from a source device i.e. iPhone, iPad, Mac or MacBook to an Apple TV. Unlike Miracast, which is purely a mirroring solution, AirPlay allows users to multitask while streaming the media content on your source device. This simply means that you can use your iPhone, iPad, Mac or MacBook for other things and it would not appear on your Apple TV screen.

While it does have its perks, it does come with a couple of limitations. First, it can only work with Apple devices; therefore, you cannot use AirPlay to mirror screens from or to non-Apple devices. AirPlay is also currently compatible with the only second- and third-generation Apple TVs so you are out of luck if you have a first-generation model.

Part 2: How to Mirror Android to Mac?

Apple products are tricky to use because they are usually not compatible with other brands---this is why most Apple users will tend to have everything Apple. However, if you are the kind who likes to mix things up, there is still hope. If you have an Android mobile device and want to mirror it to a Mac, there are ways you can experience playing a game on your Mac or use WhatsApp on a bigger screen.

Since there is no Miracast Mac, follow these steps for the simplest and quickest way to mirror your Android on your Mac screen:

Vysor is a great way to duplicate your Android screen onto your Mac's screen. All you need are three things: 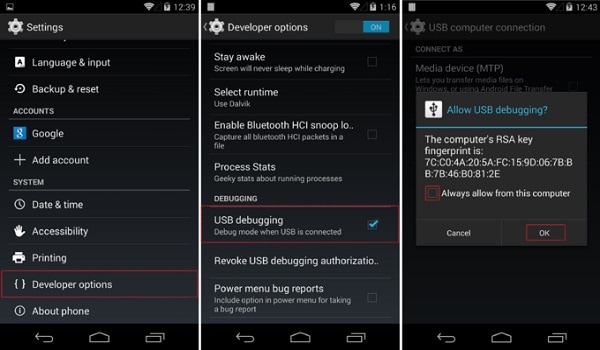 Now that everything is ready, you can start mirroring your Android on your Mac:

Part 3: How to Mirror Mac to TV (without Apple TV)

What if you do have an Apple TV but it decided to retire one day?

Google Chromecast is an alternative to AirPlay that allows Mac or MacBook users to mirror their screens to a TV. Here is how to do so:

After completing Chromecast's physical setup (plugging it on your TV and powering it up), follow these steps:

Miracast for Mac is not available but this does not mean that you cannot mirror your Mac on a TV. Hopefully, this article helps you a lot.

Mirror your iPhone to your computer!

Available on: Windows
Try It Free Buy Now
3,240,479 people have downloaded it

> How-to > Record Phone Screen > Can I Use Miracast On Mac?