How to Fix Snapchat Keeps Crashing on iPhone 13?

Do you know any application where images and videos can be shared through messages and stories? The answer is ‘Snapchat.' A fun-filled social media platform that is free to install. You can share free messages via Snapchat. Not just text messages but with Snapchat, you can share cool images with your friends, send them funny videos and update them with whatsoever you are doing.

Snapchat is a top-rated platform, especially among the young generation who like to share their life updates with the world openly. One problem observed recently is that Snapchat keeps crashing iPhone 13. This problem is new, so many people don’t know much about it. The article understudy is the perfect platform for you to learn more about this trouble.

Part 1: How to Stop Snapchat from Crashing on iPhone 13

The famous and extremely loved social media, the Snapchat app keeps crashing iPhone 13. This is a newly faced problem by iPhone 13 users. Whenever you are using an application, and it crashes, you get annoyed. What could be done when Snapchat annoys you?

If you are an iPhone 13 user and are struggling with the same Snapchat trouble, this section of the article is the most helpful thing you will ever find. 7 distinct solutions will be discussed with you under this section.

One thing that could be done is to close the app. If your Snapchat keeps crashing iPhone 13, then it is suggested that you should close the application and then re-open it. This way, the application gets a chance to start fresh, and it works properly. In case you don't know how to close and re-open Snapchat, then let us share its easy steps with you.

Step 1: To close the application, you should swipe up the screen from the bottom. Don’t swipe completely; stop at the middle.

Step 2: This will display all the applications that are running in the background. Then, among the displayed applications, you will find Snapchat. Swipe up on the preview of Snapchat to close it.

Step 2: After successfully closing Snapchat, you should re-open it to check whether it is functioning properly or not.

Another solution that could be adopted in case your Snapchat crashing iPhone 13 is updating the application. Many times, the application has been updated, but you are still using the older version because you don’t know about the update.

As a resulting factor to this, the application crashes. If you want to avoid this situation, then the best solution is to update Snapchat. If you have no idea about updating Snapchat, then look at the steps shared below.

Step 1: To update Snapchat on your iPhone 13, firstly, you should open ‘App Store.’ Then, use your Apple ID and password to login into your Apple account. After logging in, head over to the upper right side of the screen and hit the ‘Profile’ icon.

Step 2: Then, move to the ‘Update’ section. A list will appear on the screen, scroll download and locate Snapchat. Once you have located Snapchat, click on the ‘Update’ button. Wait for some time till the update finishes. After that, launch Snapchat directly from the App Store.

After you have tried updating and closing Snapchat, it's time to try your luck by restarting iPhone 13. It is possible that the application is not faulty. Sometimes, it is something with your phone that causes the problem. If restarting your iPhone 13 seems a tough job to you, then allow us to share its steps with you. 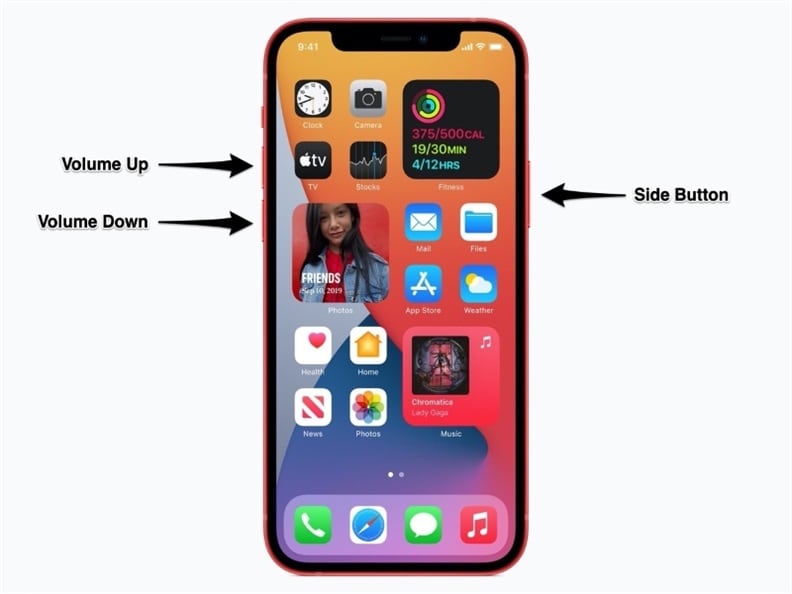 Like the applications that need updates, including Snapchat, your iOS also needs an update. The best suggestion is that you should regularly update your iOS device. In case you don’t regularly update iOS, then you must face the same crashing iPhone 13 problem. Updating iOS is not difficult, yet some people might find it new. Let us share its steps with you without any delay.

Step 1: For updating your iOS, start by opening the ‘Settings’ app and then heading over to the ‘General’ tab.

Step 2: After that, tap on the ‘Software Update’ option from the ‘General’ tab. Your device will check if you need an iOS update or not.

Step 3: In case there is an update, your device will display it. You have to ‘Download and Install’ the update. Wait patiently while the update is being downloaded. Lastly, just install the update to complete the process.

Step 1: To check the Snapchat server, start by launching Safari on your iPhone 13. After that, open DownDetector and log on to it.

Step 2: Now click on the ‘Search’ icon and search for Snapchat. After that, you need to scroll down and look for the most reported problem.

The last fix that could be adopted to get rid of this annoying problem is uninstalling and then reinstalling the Snapchat app. If nothing works from the above-shared fixes, then the last option remaining is to uninstall Snapchat. For iPhone 13 users, allow us to share the steps for the uninstallation of Snapchat.

Step 1: To uninstall Snapchat, locate its icon and open the screen where it is present. After that, hold on to the screen. Keep holding until all the other apps start to jiggle. A minus sign will appear on the top left corner of each app. Tap that minus sign for the Snapchat icon.

Step 2: A pop-up message will appear on the screen asking for your confirmation to delete the app. Simply select the ‘Delete App’ option to uninstall Snapchat. After it has been uninstalled, hit the ‘Done’ button from the top right corner.

Part 2: Why Does the Snapchat App Keep Crashing on iPhone 13?

It has been mentioned above that Snapchat keeps crashing iPhone 13, and this is among the newly identified problems. Due to this reason, many people don't know the resulting factors for this issue, neither are they aware of its fixes. The section above shared the solutions to fix this problem, whereas the coming section will walk you through the causes of this problem.

Snapchat Server is Down

One of the many reasons Snapchat crashes on iPhone 13 is its server. Most of the time, we face the problem because Snapchat Server is down. In case of this, you should check the ‘Server’ status from the internet. The guiding steps for this have been discussed above.

Another very common factor that causes Snapchat crashing iPhone 13 is the internet connection. This happens very often when your internet connection is weak and unstable. Whenever you try to launch Snapchat with such problematic connectivity, it crashes.

Both the applications and the operating systems get a regular update. There is a fair chance that your app is updating automatically, but the iOS version running on your iPhone is outdated because it is not auto-updated. Due to this incompatibility between both versions, the app continuously crashes on iPhone 13.

VPN is the Hurdle

One factor that is ignored in case of any problem is VPN. You all have somehow, some time used the Virtual Private Network for some reason. That VPN is now causing the problem by interrupting the security and crashing your Snapchat application on iPhone 13.

iPhone 13 users have been facing a problem with the most widely used Snapchat application. A commonly received complaint is that the Snapchat app keeps crashing iPhone 13. For all the annoyed iPhone 13 users, this article is a little treat for you.

The article above has discussed various easy, unique, and workable solutions for this problem. Not just the fixes but the causing agents behind this problem have also been shared so that the problem could be avoided.