Every individual has a knack to be in pace with the trendy stuffs. In the current scenario Samsung Galaxy S7/S7 Edge has conquered the world of Android phones due to its mind blowing features. It is a product from the giant Android phone manufacturer Samsung.

Samsung Galaxy S7 Edge has a display screen of 5.50 inch with the front camera 5 mega pixels and the resolution is 16:9 ratios. This model is sold at reasonable rate. The battery delivers endless power supply to the phone without any interruptions. Moreover the battery has a longer life time when compared to other models in the market. This model meets your expectations without compromising on any factors.

Jailbreaking the Samsung phone is identical to rooting process. Equivalent strategy is carried out to jailbreak the Android system without any serious issues. Only the terminology differs and you will be able to enjoy similar benefits of rooting through jailbreaking process. The foremost reason the customers used to jailbreak Samsung Galaxy S7 is to utilize the maximum features of the device. Most of the manufacturers restrict the accessibility of various unique features in the device for unknown business reasons.

In order to enjoy the whole benefits of a smart phone, people used to jailbreak the device under their own risk factors. To be particular jailbreaking the Android phones gives a network freedom. You will be able to customize your phone and get rid of unwanted apps provided by the manufactures without any uninstall feature. The jailbreak activity in the Android phone will ultimately increase the speed of the system. The customer used to jailbreak Galaxy S7 in order to acquire full control of the device without much difficulty.

Precautions before you Jailbreak Samsung

Jailbreaking an Android Phone is a risky process. So you have to carry out some precautionary measures before you jailbreak the Android system. Follow the below steps prior to your jailbreaking process:

How to jailbreak a Samsung phone without PC/Computer

Step 1: Download Frama jailbreak in your Samsung phone to jailbreak your device without PC. After the successful downloading process go to the Android file manager and launch the software for installation. Click the ‘Install’ button to trigger the installation. Soon after the installation you have to open -‘the APK’- to commence jailbreaking process. Select ‘Install Superuser’ from the displayed list. Check out the below screen shot for better understanding. 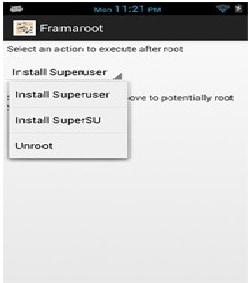 Step 2: Choose an exploit from the given list. Here you have to select ‘Aragom’. 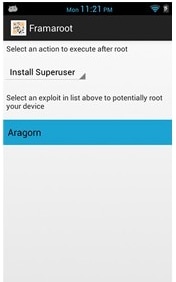 Step 3: Just wait for few minutes and the process gets successfully completed. 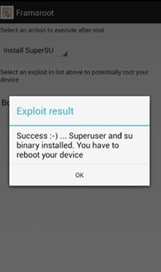 Now your device has been jailbroken without using PC.