Why Are My iPhone Messages Green? How to Turn It Into iMessage

If you are an iPhone user, you are used to your messages having a blue background. So, you won’t assume that all is normal if your iMessage turns green. So, the first question that crosses your mind is whether your smartphone has a problem.

Fortunately, I can bring some good news. It doesn’t mean that your handset has an issue. Its settings could be off by the phone is just fine. It narrows down to the technology you are using to send the message. That’s what we will be talking about throughout this article. We will be discussing the green messages on iPhone, what that means, and what can be done about it. Read on!

Part 1: What Is the Difference Between Green (SMS) And Blue Messages (iMessage)?

Yes, there is a difference between a green and a blue message, especially when using an iPhone. As mentioned earlier, the difference is usually the technology used to send the message. For example, the green message shows that your text is an SMS text message. On the other hand, the blue messages show that they have been sent via iMessage.

The phone owner usually uses a cellular voice service when sending an SMS. Therefore, it is possible to send an SMS without a data plan or access to the internet. In addition, this option cuts across all messages regardless of their operating systems. Therefore, whether you are using an Android or iOS phone, you are in a position to send an SMS. Once you go for this option, expect a green text message.

However, iPhone users have another option of sending messages using iMessage. Due to its design, the application can only send messages using the internet. So, if you don’t have a data plan or internet connection, rest assured that sending an iMessage will be impossible. If it is an iMessage, expect to see a blue message instead of a green one.

The bottom line is that several common instances could lead to an iPhone green text. One of them is sending a message without an internet connection. The other one is an instance where the recipient is an Android user. That’s because it is the only way the Android user will read its content. In addition to that, the issue would be related to iMessage. On one side, it could be disabled on either device, the sender or the recipient.

On the other hand, the issue may be the iMessage server. If it is down, it will be impossible to send blue messages. In other cases, the recipient has blocked you. That is usually the main reason why messages between the two of you were usually blue but suddenly turned green. So, if the text message was blue then turned green, you have the possible reasons behind such a change. 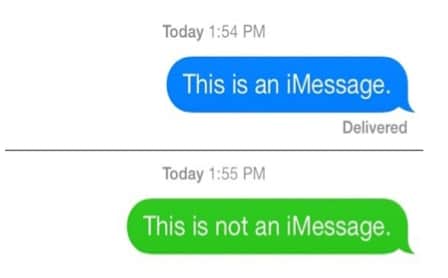 Part 2: How to Turn On iMessage On iPhone

Having an iPhone isn’t guaranteed that you will automatically be sending blue messages. So, if you see a green text message despite a data plan or access to the internet, there is one possible cause. It shows that the iMessage on your iPhone is disabled. Fortunately, it is pretty easy to turn on iMessage. First, however, these are the steps you will have to follow.

Step 1: First, ensure that you have a reliable internet connection. Preferably, use Wi-Fi.

Step 2: Open the “Settings” application on your phone.

Step 4: You will notice a toggle button next to the iMessage label. 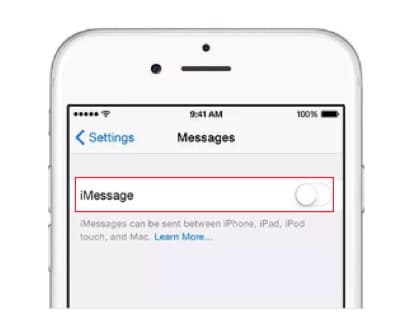 Step 5:  If it is off, go ahead and toggle it on by swiping it to the right.

iPhone users who do so often enjoy several benefits. One of them is the dots that show when someone is typing. It is impossible to appreciate that when using SMS. When sending SMS messages, your only option is to have a texting plan. As for the iMessage, you have two options: having a data plan or connecting to WI-FI. You don’t have to specify what to use since the device automatically detects what is available. Unlike a normal SMS message, an iMessage will also display the location from where the message was sent. Last but not least, you can choose to be notified whether your message is delivered and read.

Part 3: How to Send A Message As An SMS Text Message

What if you want green messages on your iPhone? iPhone manufacturers have a way of letting you have your wish despite using iMessage and having an internet connection. It is as simple as disabling iMessage. You can also follow the steps below.

Step 1: Open the “Settings” application on your phone.

Step 3: You will notice a toggle button next to the iMessage label.

It is important to note that it is not the only way to go. Alternatively, follow the following steps, and the result will be no different.

Step 1: Create a message on iMessage.

Step 2: Go ahead and long-press that message if you want it to appear as a green text message.

Step 3: Upon doing so, a dialogue box will appear, showing several options. These choices include “Copy,” “Send as Text Message,” and “More.”

Step 4: Ignore the rest and tap on “Send as Text Message.”

Step 5: Upon doing so, you will notice that the blue text message turned green.

You will not panic upon seeing green messages on your iPhone. After all, you know the several reasons for the green text message. Besides that, you also know what to do if your iMessage turns green. So, that said and done, do what’s necessary to change the situation. Equally important, if you see blue messages but like them green, you can also change the situation. Follow the guides above and all will be well.

> How-to > Frequently Used Phone Tips > Why Are My iPhone Messages Green? How to Turn It Into iMessage