Is Your iPhone Stuck on Apple Logo? 4 Solutions You Must Know- Dr.Fone

Is Your iPhone Stuck on Apple Logo? 4 Solutions You'd Wish You Knew Sooner

We’ve all been there. If you use an iPhone, you have likely encountered the frustrating issue of seeing your iPhone get stuck on the Apple logo and just can't get past it. The normally pleasant image of the iconic Apple logo becomes an irritating (and even panic-inducing) sight.

Are you dealing with this problem right now? I understand how you feel, but thankfully you are now in the right place because we have the solution. Read ahead to learn about all of the different ways that you can fix your iPhone stuck on the Apple logo.

The video above can teach you how to fix iPhone stuck on Apple Logo, and you can explore more from the Wondershare Video Community.

Part 1. What May Cause the iPhone Stuck on Apple Logo?

How to solve the issue of iPhone stuck on Apple logo caused by Software problems? Just keep on reading.

If you have no idea on how to fix iPhone stuck on Apple logo and want to enjoy the easiest way to solve it. Thankfully, you can move onto an affordable step that will solve your problem and save your date. Head to the Dr.Fone website, and scroll to the Repair option. The Dr.Fone team has specifically designed Dr.Fone - System Repair to get rid of different iPhone issues, such as the ‘stuck on the Apple logo’ problem that you are facing. Best of all? It fixes your iOS and sets it back to normal, without causing any data loss whatsoever.

Using a forced restart to fix an iPhone when it is stuck on the Apple logo is usually the first thing that people try, and it can work. It usually works best when there are no other problems with your iPhone in the first place. Even if it doesn’t work 99% of the time, it is always worth a try – it won’t harm anything, so it can’t hurt!

If your iPhone 8 (or newer) gets the Apple logo stuck on its home screen, try the below steps to force restart your iPhone. 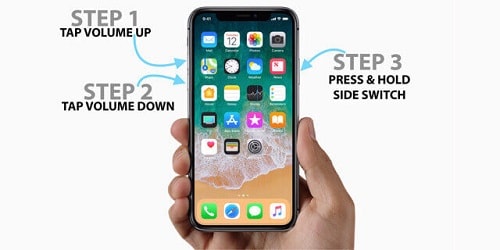 3.2 How to force restart an iPhone 7 and 7s to fix iPhone stuck on Apple logo

The iPhone 7 and iPhone 7 Plus operate a little bit differently from previous models, but thankfully the process is still almost the same.

If your iPhone 6s (or earlier) meet the Apple logo stuck problem, the process to force restart is slightly different from all the later models. 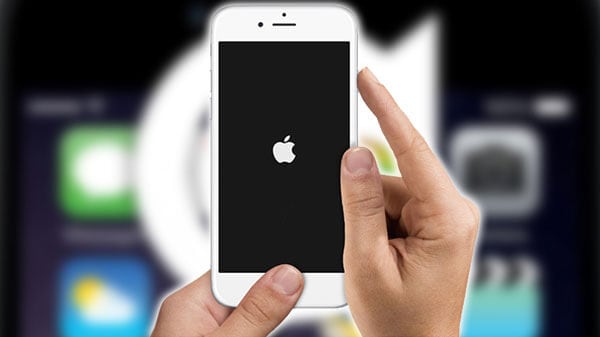 If the forced restart doesn't fix the problem, you can go back to the first solution.

Part 4. Restore iPhone to Fix the iPhone Stuck on Logo in Recovery Mode

Ok, it has come to this. You have to restore your iPhone in Recovery Mode to solve the frozen Apple logo problem. Remember – this means that all of the data on your iPhone will be erased. You should make sure that you have the latest backup of your iPhone and your computer is equipped with the most current version of iTunes. Then get started to fix iPhone stuck on Apple logo with the steps below:

After you put the iPhone in recovery mode successfully, click on Restore in the dialog box and follow the on-screen instructions to restore your iPhone and get rid of the iPhone stuck on Apple logo issue.

You may be interested in: How to Recover iPhone Data Lost after Restore?

4.2 For your iPhone 7 and iPhone 7 Plus on iOS 13, the process is similar but slightly different.

4.3 For iPhone 6s or Earlier devices:

Part 5. Restore iPhone to Fix the iPhone Stuck on Logo in DFU Mode

By this point, you have tried the 1st and 4th step, and you are at your wit’s end. While we recommend you go to step 1 and use Dr.Fone, you might decide to try a DFU (Default Firmware Update) restore. This is the most serious type of iPhone restoration, and it should only be used as a last-ditch option. It leads to complete and irreversible data loss, so don’t say we didn’t warn you!

5.1 Fix iPhone 8/8 Plus, iPhone X, iPhone XR, and iPhone XS (Max) stuck on Apple logo in DFU mode, you can follow these steps.

5.2 Fix iPhone 7 and 7 Plus stuck on the Apple logo in DFU mode, you can follow these steps.

5.3 Fix iPhone 6s and earlier devices stuck on Apple logo in DFU mode, you can follow these steps.

Also, some useful DFU tools are really helpful when you need to boot the iPhone in DFU mode.

Part 6. What if the problem is caused by Hardware Problems?

If your iPhone is stuck on the Apple logo and you have tried the above solutions, the problem might be with your hardware and not a software issue. If this is the case, you should do a few things:

We all know just how frustrating it can be to stare down at your phone and just see the screen stuck on the Apple logo. If you have seen the Apple logo stuck on your Home screen one too many times, it’s finally time to fix the problem for good. Thankfully, by using these steps listed above and following the advice we have included in this article, your phone should be back up and running within no time. Good luck!